To start I'll like to introduce the three tools (apart from Unity) that we are going to be using in this guide.

Git is a free and open source distributed version control system. This means that every developer has the full history of their code repository on their computer. This might seem counterintuitive at first glance since having a whole copy makes the first clone significantly slower, but all other operations (add, rm, commit, branch, checkout, stash, cherry-pick, among others) are super fast and 100% performed locally, unless you want to fetch new changes from the remote origin or upload them.

There are a lot of reasons on why to use a version control system while coding. In the top of my head, I'll say that some good reasons are:

Finally, according to Atlassian:

Git is the most widely used version control system in the world today and is considered the modern standard for software development. ~ some guy at Atlassian

So you better master it if you want to get into software/game development.

Git is great for text-based files. But, what happens with large binary files as images, videos, audio, materials or other assets that are common in the game development domain? The repo might grow exponentially if this kind of files are tracked, or constantly modified and re-uploaded to the repo. For this kind of files, we can leverage Git-LFS.

Git-LFS is an extension for Git that replaces big files with text pointers inside Git, while storing the file contents on a remote server, such as GitHub. The use of Git-LFS is not mandatory in most cases, but if you are working on a big project that has this kind of files, it will probably benefit a lot from using it.

What is GitHub and why GitHub?

GitHub is a platform that allows you to host your Git repositories. Wish it was as simple as that, but that's the first step to understand GitHub and its plethora of features. If you don't believe me just go to github.com/features and check them for yourself. They divide them in small groups: collaborative coding (the core of git), automation & CI/CD, security, client apps, project management, team administration, and a big community.

GitHub, alongside BitBucket and GitLab, are the top three git-centric products. I personally enjoy GitHub the most because of the community and its great integration inside the Unity Editor. You can pick any platform for your repos, just pick one and let's get to business (I'll be using GitHub for this tutorial). 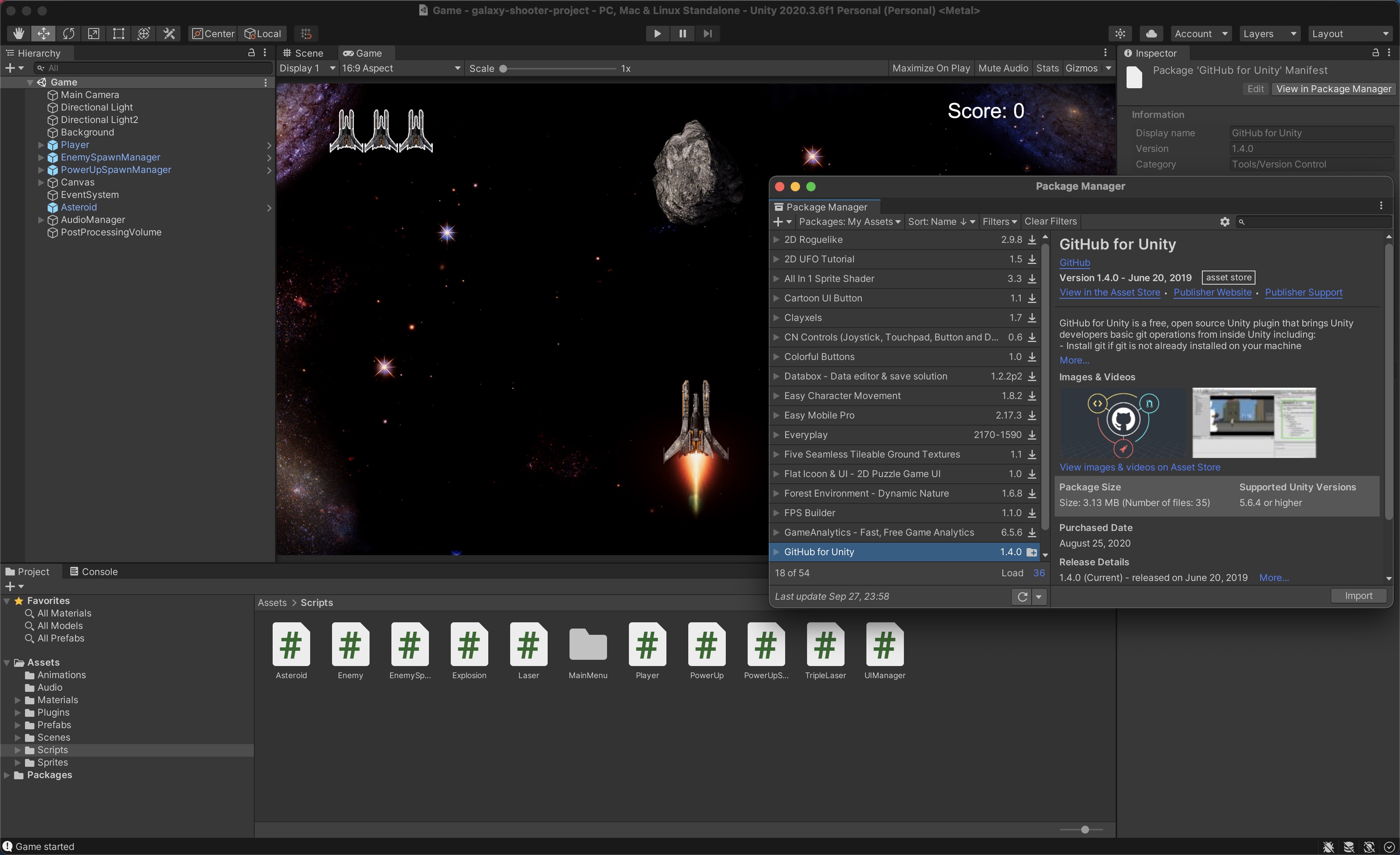 Github for Unity is an Unity Editor plugin that will enable you to have your git workflow inside the Unity Editor. Maybe you will not 100% do it from there, but it helps sometimes and is really easy to setup. Here is a glance to a couple of things you'll be able to do without leaving the Unity Editor: 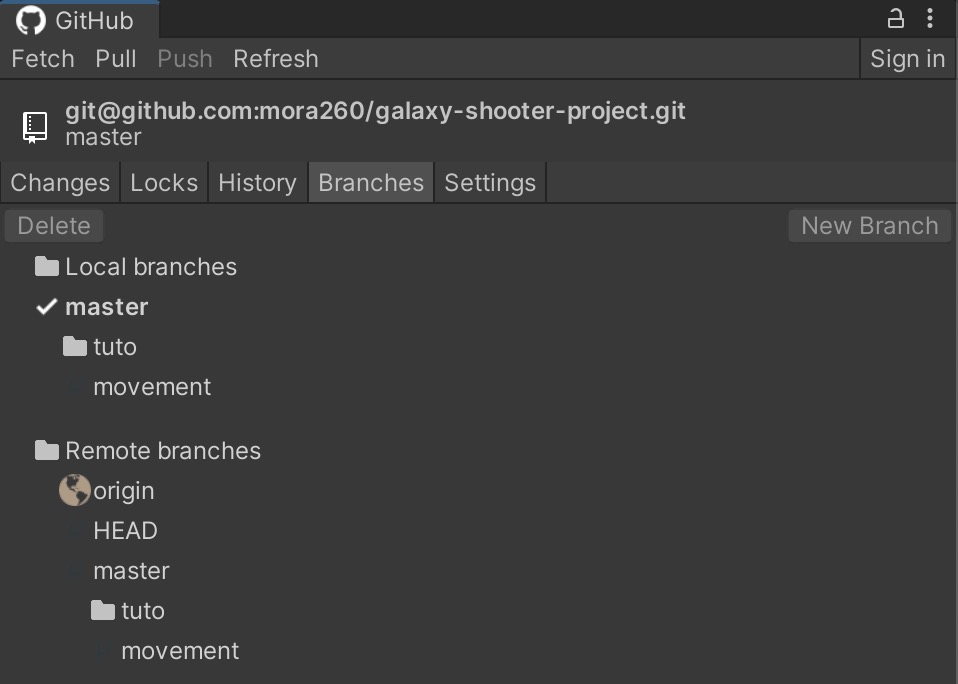 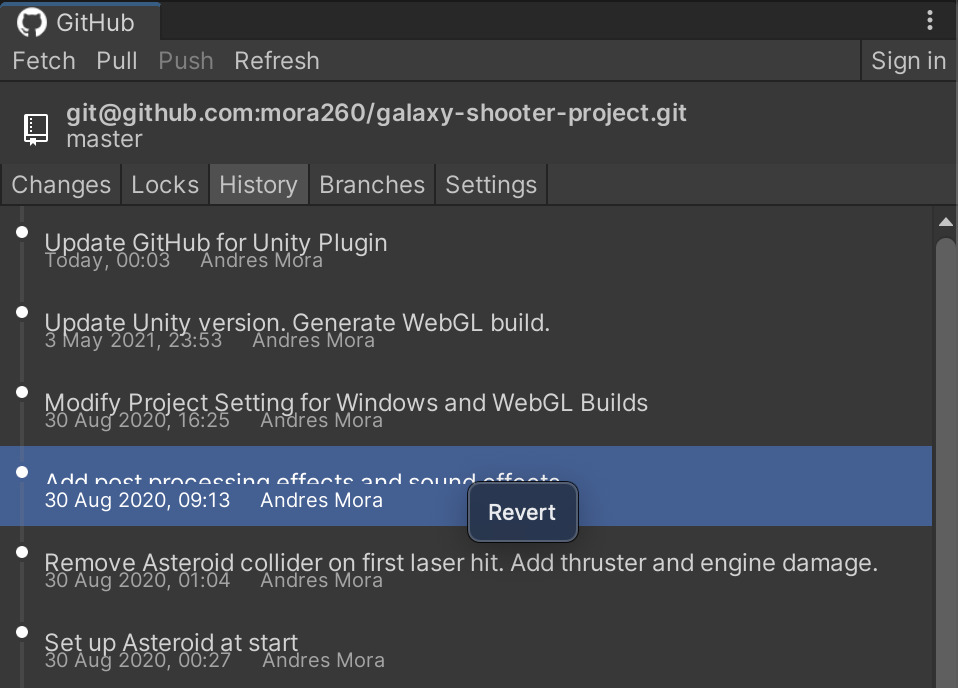 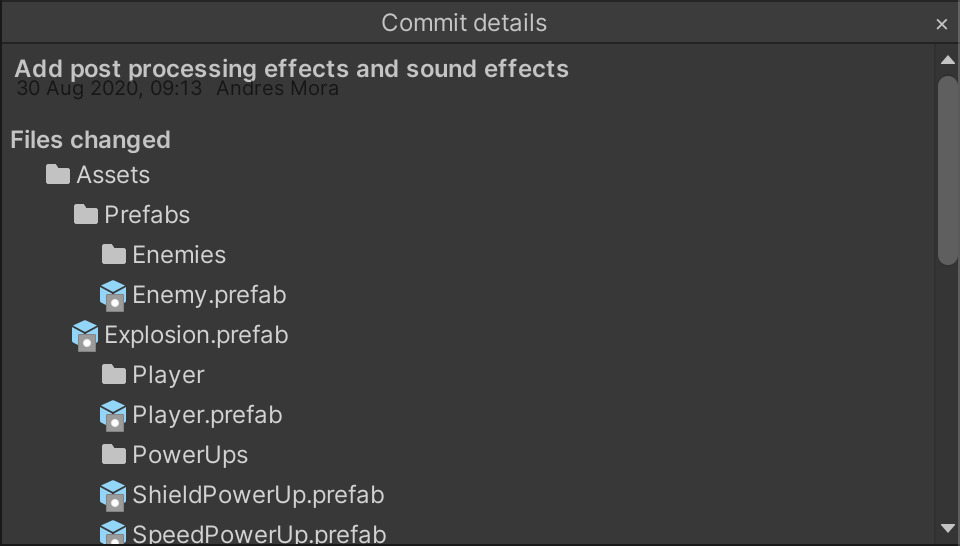 Installing git-lfs depends on your OS as well. In this case, the best guide I've found for git-lfs was made by GitHub themselves. Follow that guide here and come back to finally start creating your GitHub repo and setting up version control for your Unity Project.

Add GitHub for Unity Plugin to your Unity Project

First go here (log in if you are not already) and add this package to your Assets. Then follow this simple steps with images: 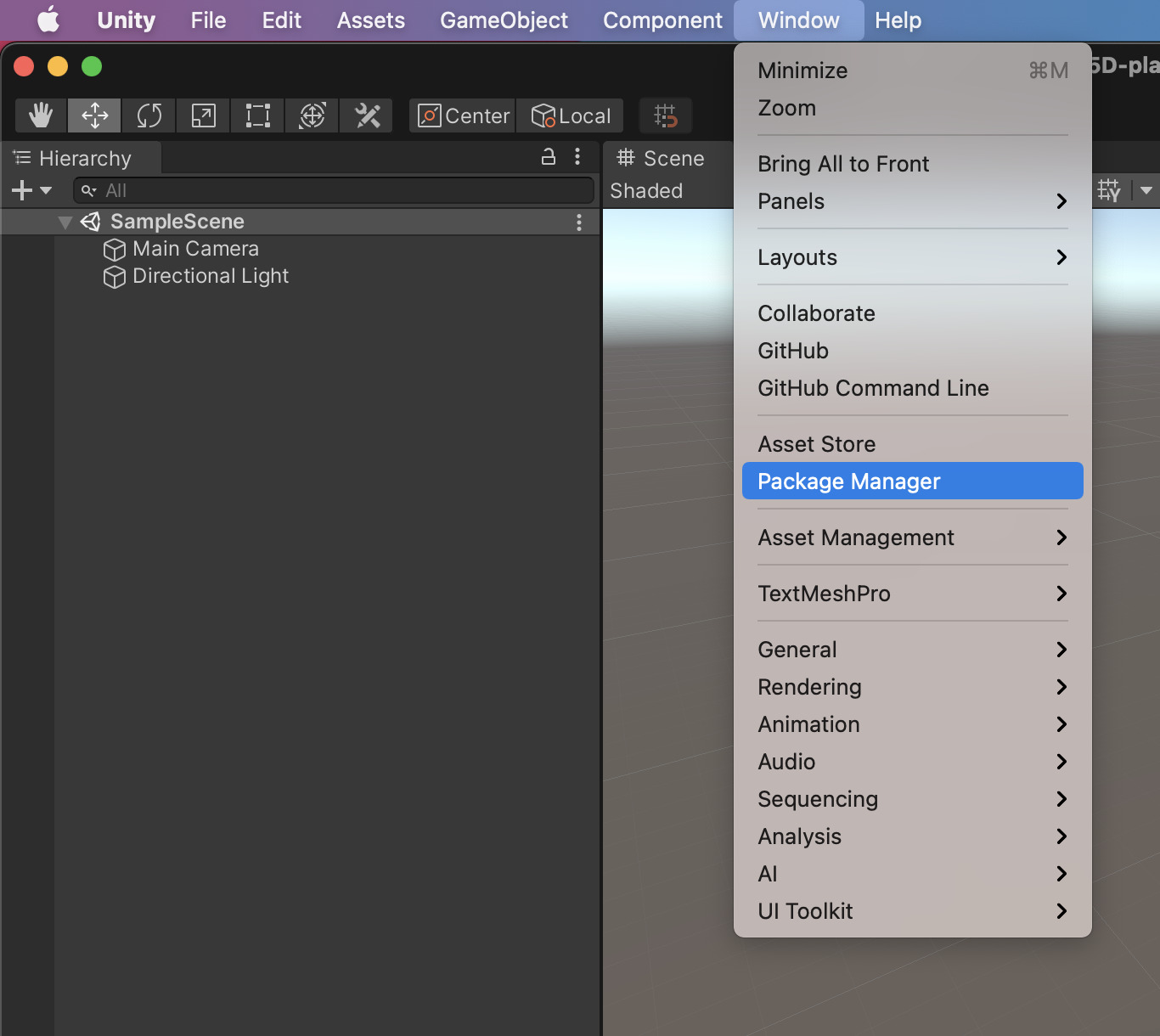 Select packages from My Assets 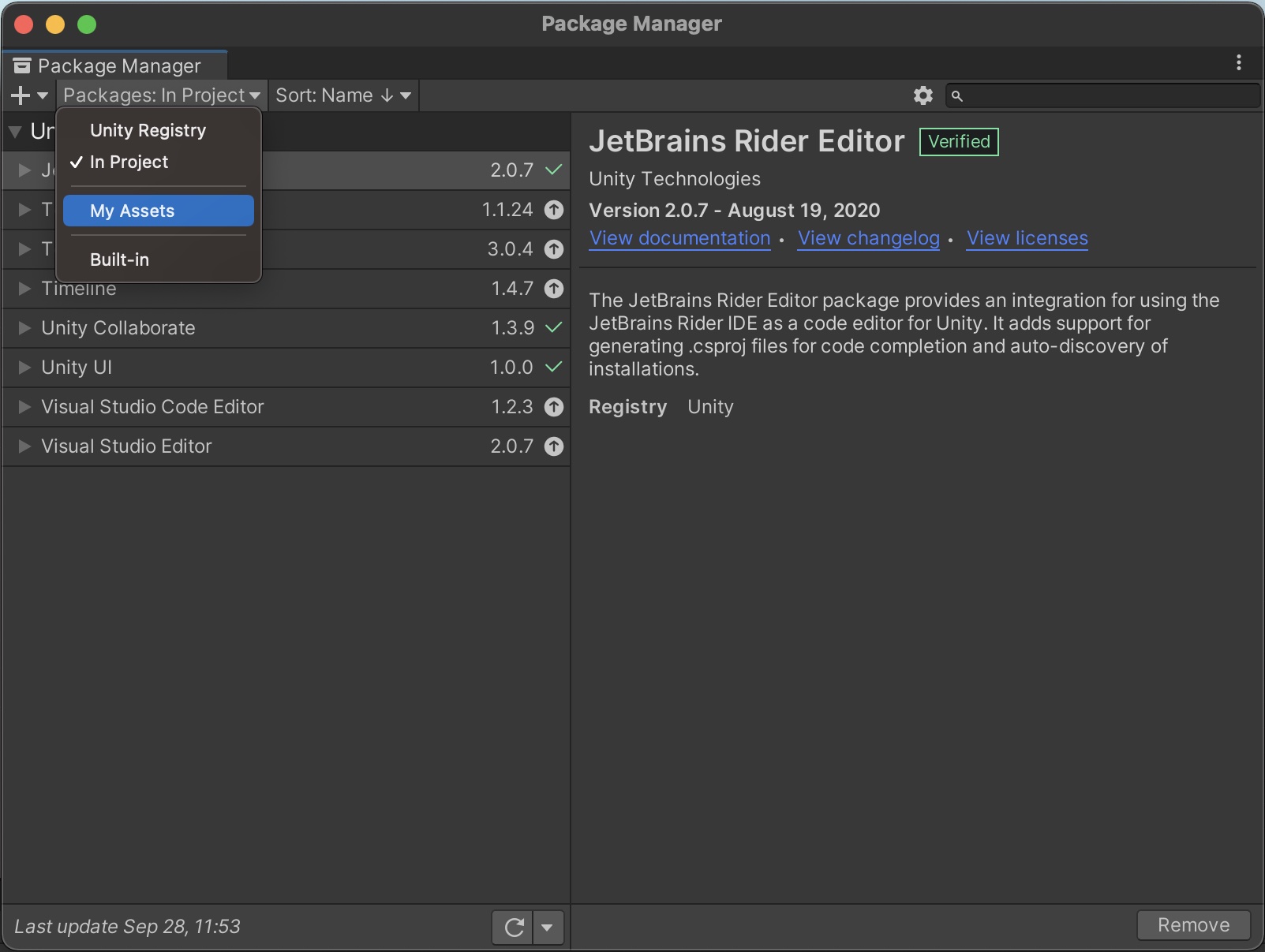 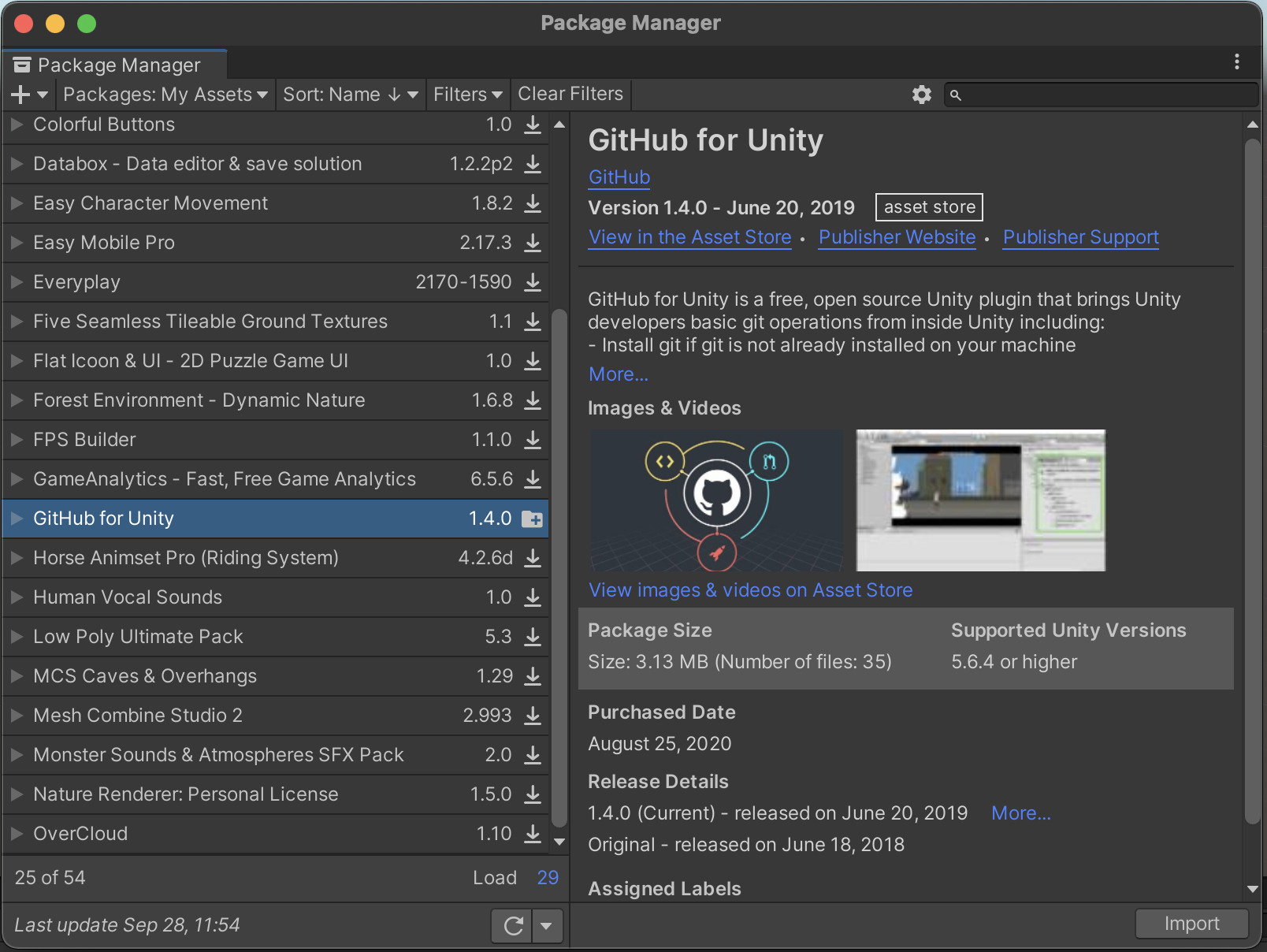 You should now see GitHub inside your Plugins directory in Assets

This should finish the setup and we can initialize our Git repo using this tool.

Now that the plugin was added to the project, we can use it to initialize our Git repo. 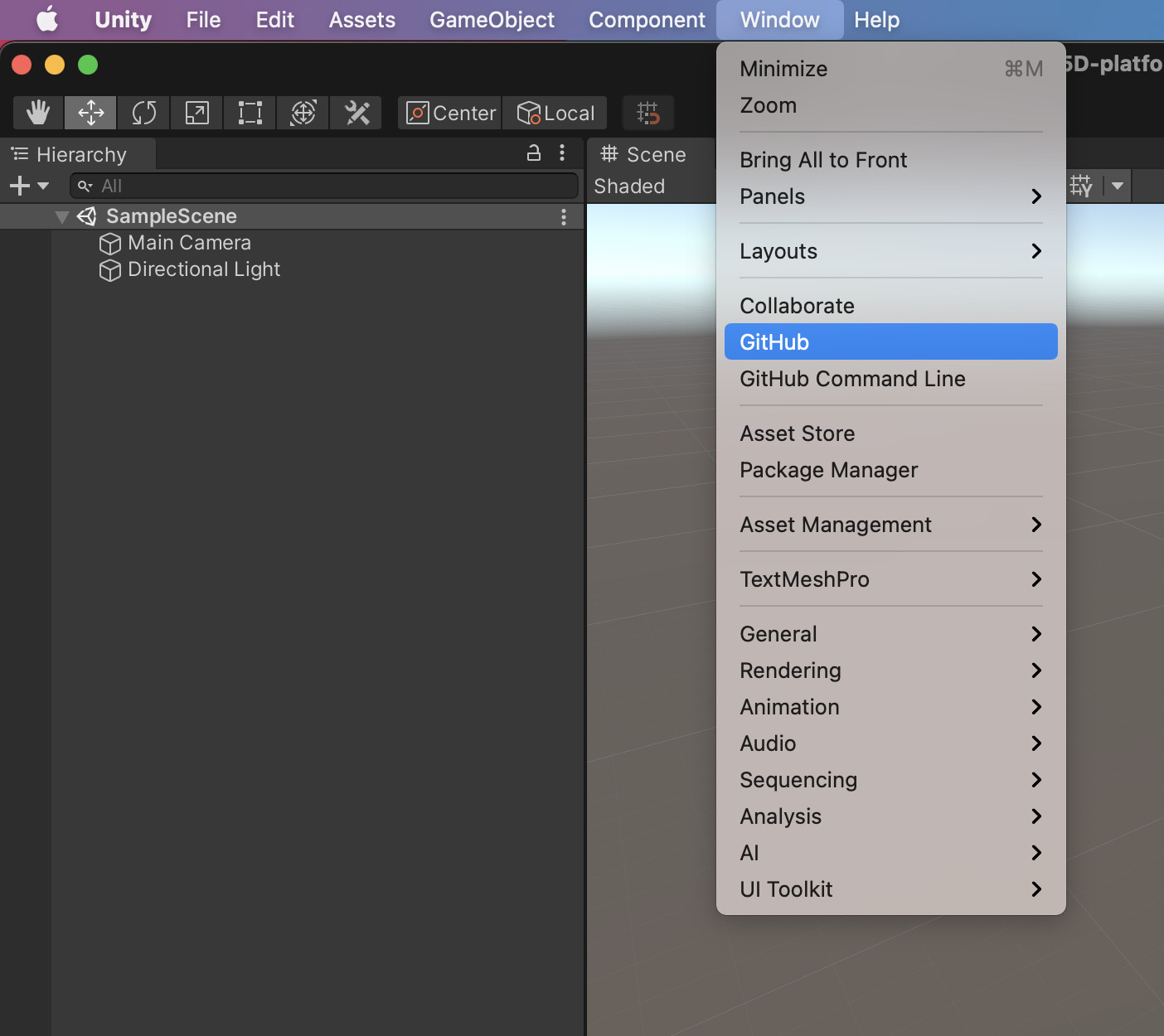 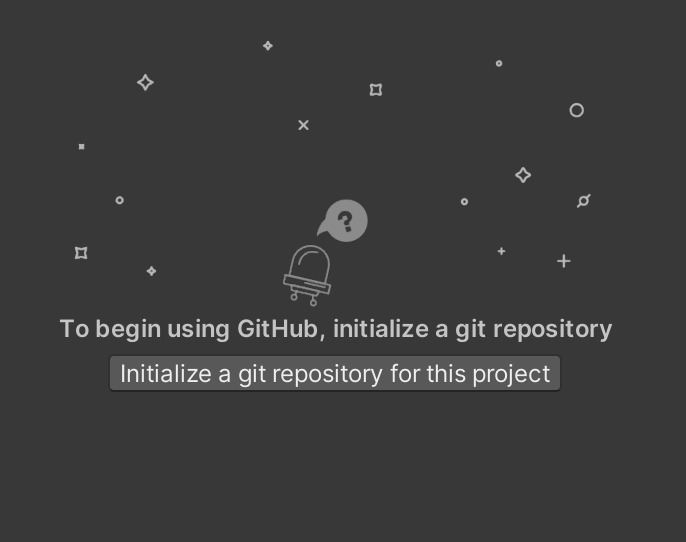 It will take a couple of seconds and now Git is enabled in the projects directory. You'll see that there are a couple of new files and changes ready to be "commited".

Click on "All" to add all files to the next commit 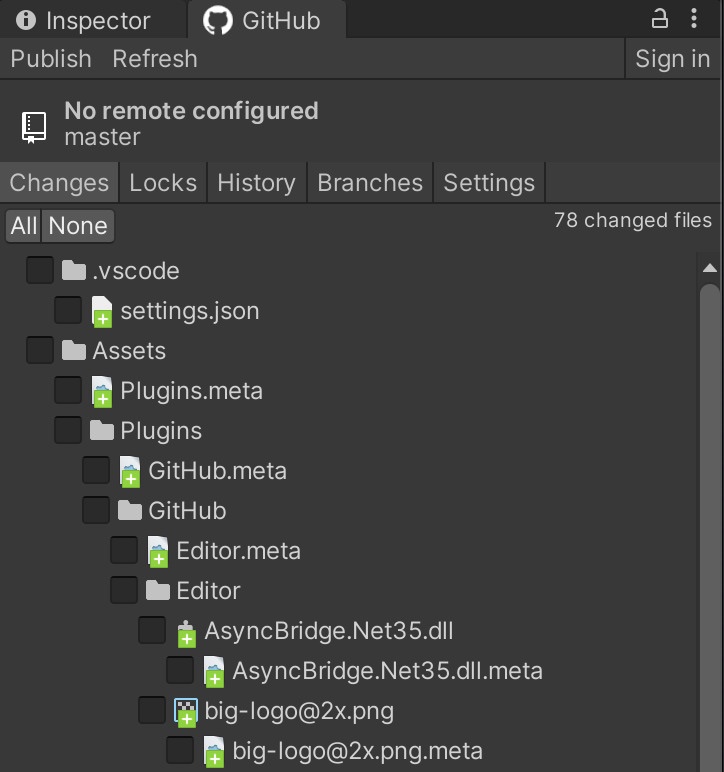 Write your commit summary and description and click commit to [master] 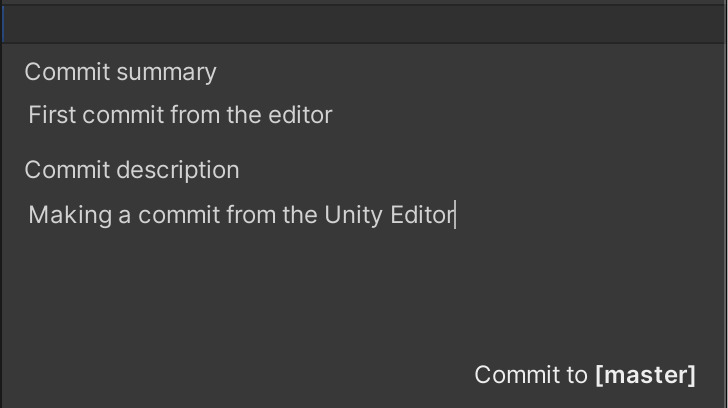 Now the current state of the project is saved as a Git commit, and can be viewed in the History tab. Now we can initiate Git-LFS from the command line.

Initialize Git-LFS from the command line

Just open a terminal and navigate to your projects directory and execute these commands:

You should see something similar to the following: 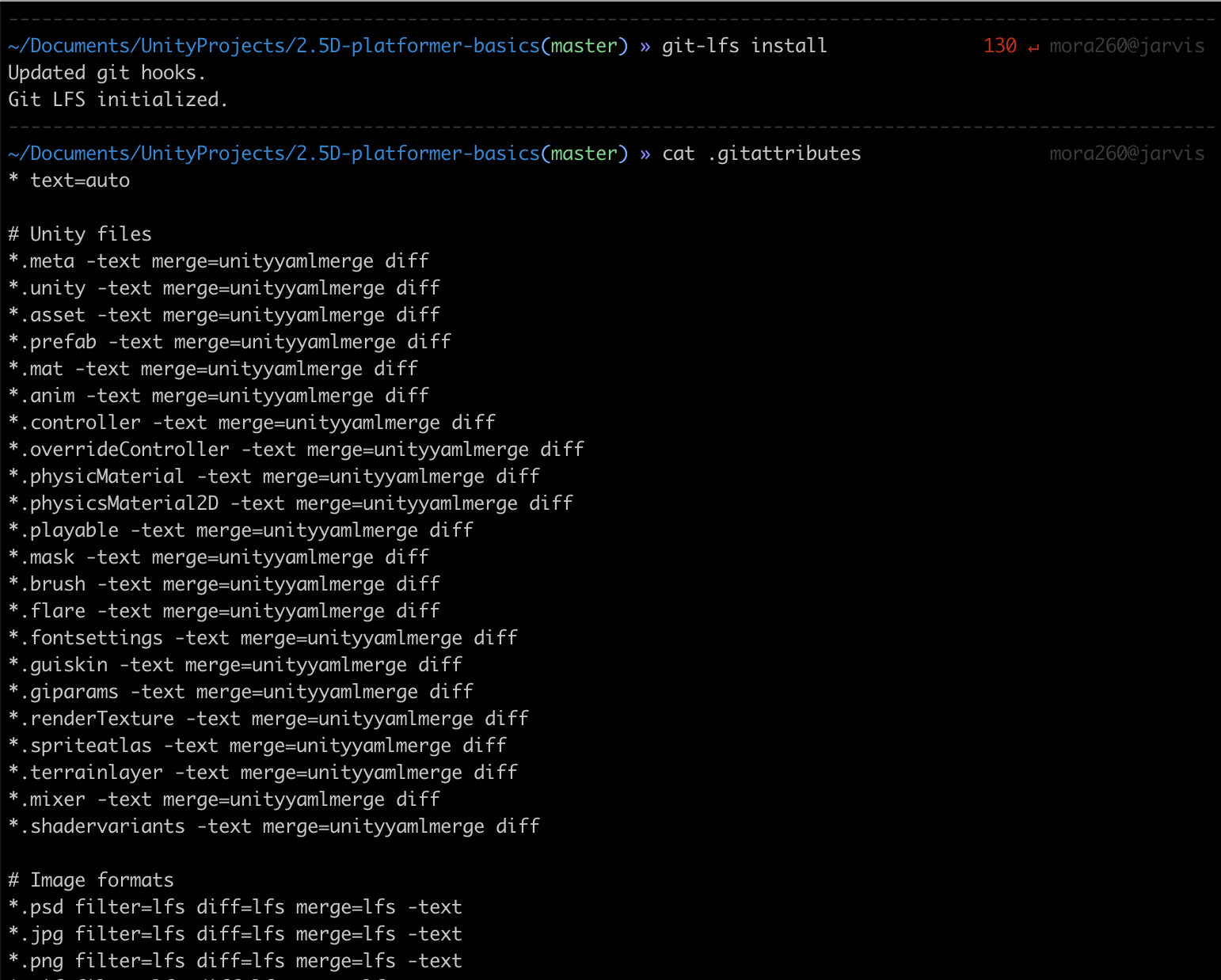 The first command was used to initialize the git-lfs plugin and the second one is only to display the file types that git-lfs will take care of. All of these file types are already here thanks to initializing the git repo using GitHub for Unity.

Now for the final steps we are going to create an online GitHub repo to track our projects progress. This steps are quite easy, specially if you are already used to GitHub. Login or create and account if you don't have one yet. Then follow this simple steps with images:

Fill your repository information. Leave the bottom options unchecked to guarantee it is a completely empty repository. Click Create repository. 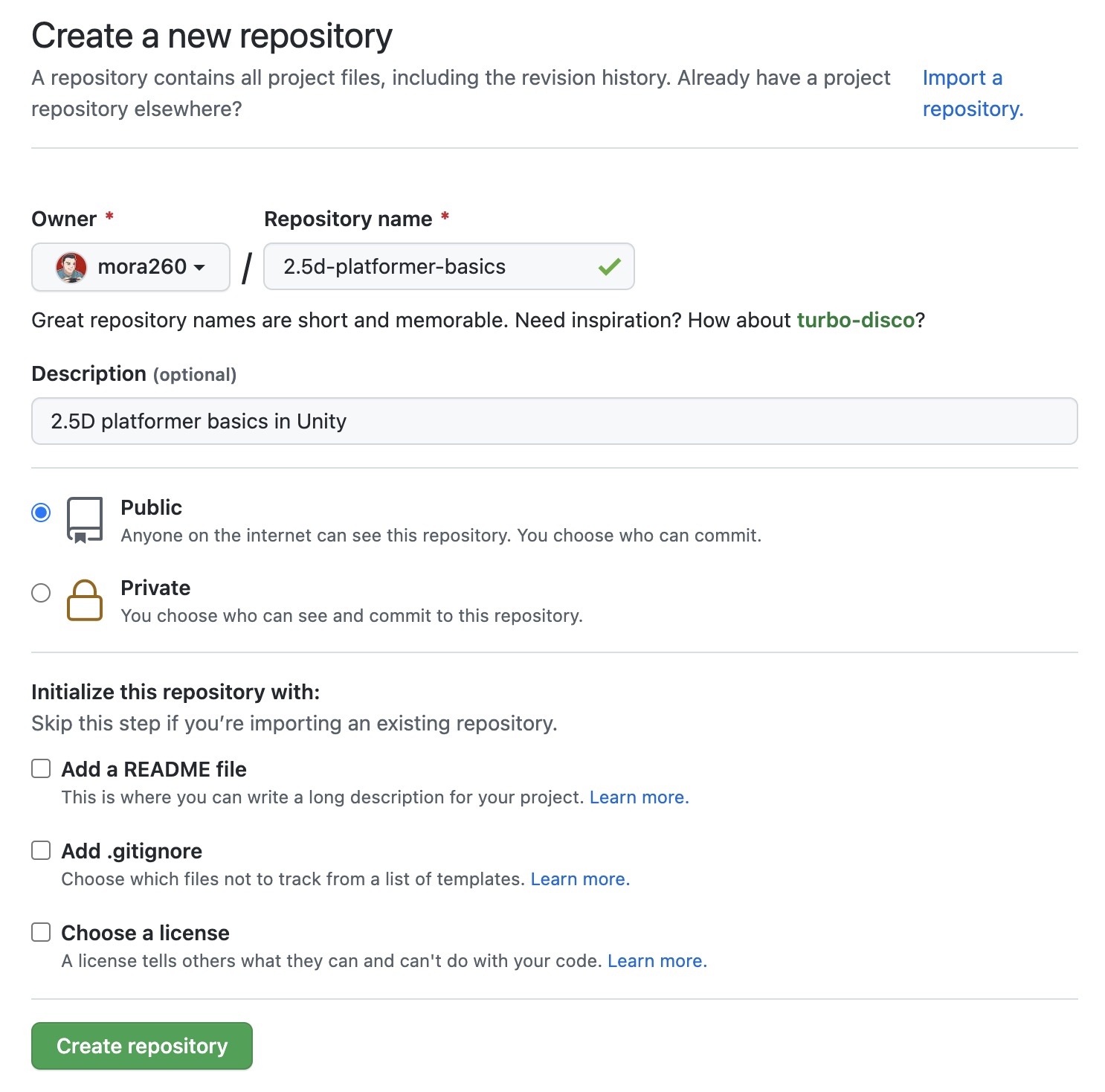 You'll see the next screen after creating your repo. We'll be following the second option: adding a remote origin to your existing repo. 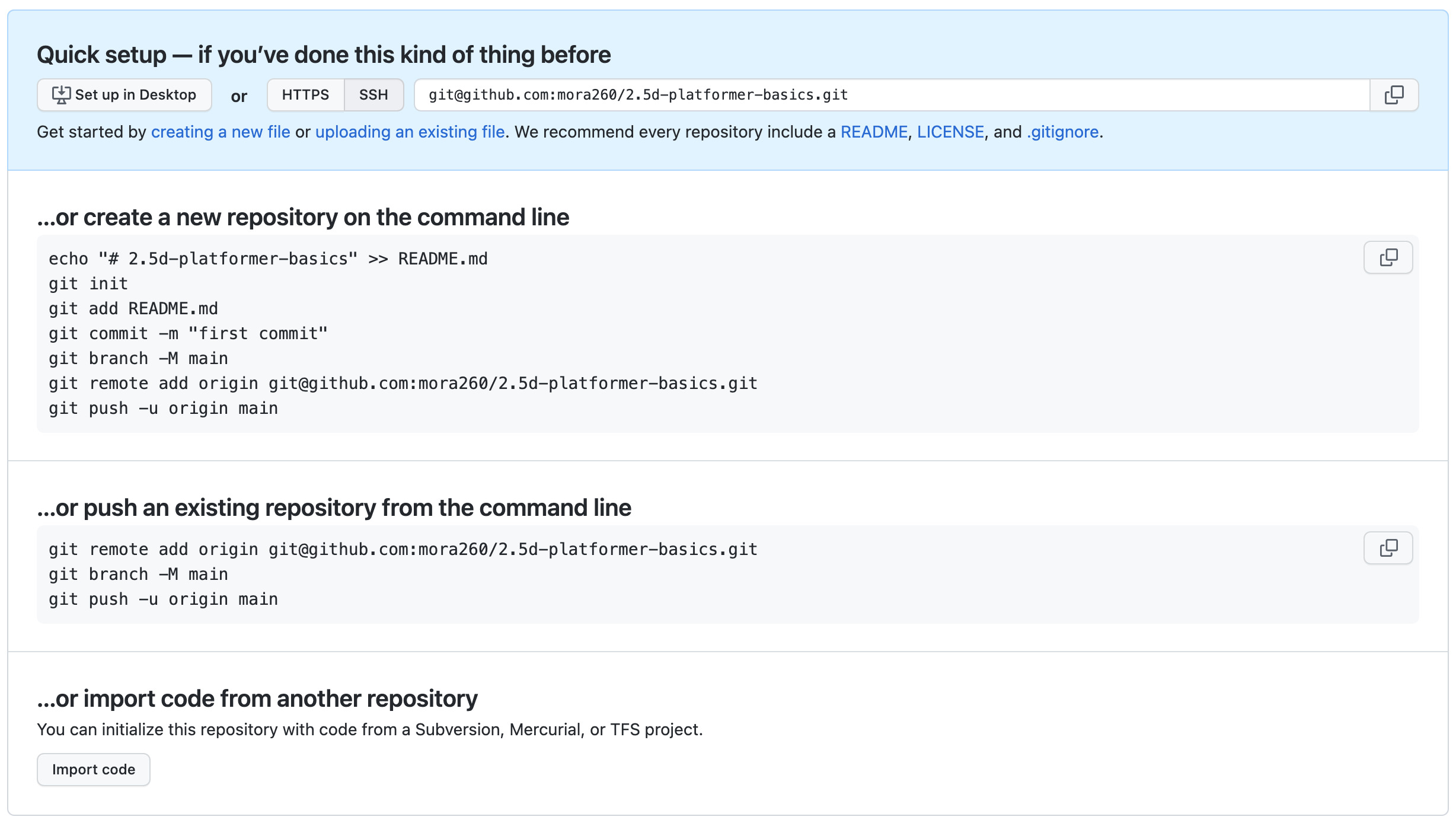 Now on a terminal enter these commands:

Finally if you reload your GitHub repo page, you should see that your files are already uploaded and you have an online working repository to safely track your project's progress. 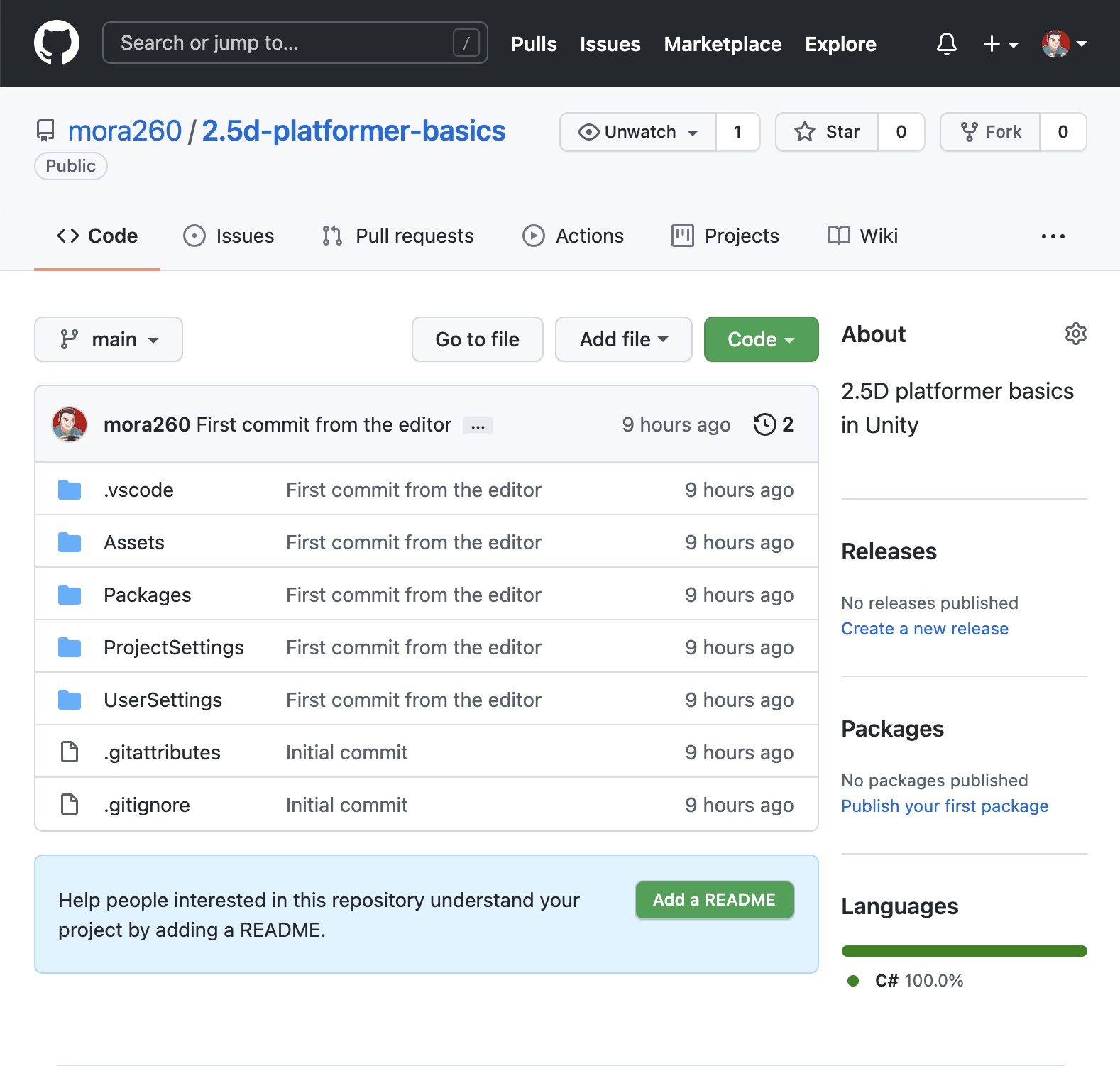 We've reached the end of this tutorial. I hope that it helped you get started with the Unity + Git workflows.

See you next time!